The colors and the symbolism

We often ask the question: “Why did this film or that film wоn all the awards at the biggest festivals?” There is no such thing as a bad movie. There is – simply put, a “richer and poorer film.” There are many details to consider when viewing a film by a film critic and film theorist who are part of a jury at a film festival. They are stylistic experts and know exactly what the poet (director) meant by the director’s decision, in a shot, a scene or an entire film. But stylistics is a very broad subject and it takes time and reading and reading to understand. One part of the film language that should be very well known and implemented in the film are the colors and their symbolism.

I will be brief and specific. No digressions and detailed explanations.

It can be said that the formation of the meaning of colors and their functions began from the primitive cultures. It is the Tricolor symbolism, it exists in African tribes, Malay Bushmen, Australian Aborigines, even among Indians – Cherokees and others. In all these tribes, WHITE is associated with water, air, purity, serenity, joy. BLACK with the earth, with something unclean, evil and death. RED had a combined meaning, a condition. When it is mixed with white-good forces, when it is with black-dark forces. For such they had the sun, the fire and others.

In Egypt, YELLOW is a symbol of the sun god – Ra, but also of the desert; RED symbolizes strength, evil, violence; GREEN is a symbol of fertility, of the god Osiris; THE BLUE is a symbol of the god Pta and of heaven; THE BROWN of life, and the BLACK of death. The ancient Chinese symbolism of colors is related to the pentatural understanding of the world – the five elements (wood, fire, earth, metal, water) and are associated with all the phenomena of the human world. GREEN – tree, spring, Jupiter, sour; RED – fire, south, summer, sea, bitter; YELLOW – earth, Saturn; WHITE – metal, autumn, Venus, sharp; BLACK – water, north, winter, Mercury, wet, salty.

The Japanese symbolism of the meaning of colors is related to religion and philosophy. It had a strong influence on the Kabuki Japanese Theater; BLACK – strength, courage, superhuman strength; BLUE – cold-bloodedness, immorality; VIOLET – fear; BLACK AND BROWN – divinity. 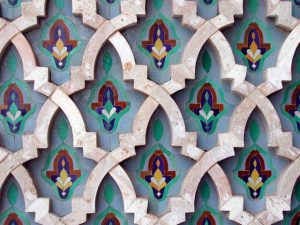 The Middle East and Islam oppose existing cultural symbolism. The light is not connected with God, there is nothing sacral. Darkness is also not placed opposite to light, and they are in a consecutive relationship depending on the cause. Darkness is the clothing of the night, and the shadow is the struggle of the sun. The first color of Islamic symbolism is WHITE – it symbolizes holiness, dignity and not a tragic, but a mild symbol of mourning; YELLOW – light, sun, gold; RED – sun, fire, blood as a sign of life and strong emotions in biblical symbolism red symbolizes sin and torture); Heavenly BLUE – one of the most popular – heaven, water, talisman of the Muhammadans, serenity, benevolence; BLACK – has a negative meaning when associated with dirty motives, otherwise it is wisdom and deep thinking. The main sacred symbol of Islam is the Black Stone; GREEN – a symbol of the Muslim paradise, the union of the earthly and the heavenly beginnings, the Holy Flag of Muhammad is green; BROWN – distraction, decay, death; GRAY – the face of evil and meanness.

Western European Middle Ages are entirely subordinated to the idea of ​​God and the divine to the most beautiful. The scriptures mention that the colors of all times were WHITE, GOLD, PURPLE and RED; GREEN is earthy; BLACK – far from God. Otherwise WHITE – divinity, holiness, faith, close to the divine, is also a symbol of mourning (paradise); RED – the color of the holy blood of Christ, the fire of the day of terrible judgment; PURPLE- in the symbolism of the Roman Empire was a symbol of high power, grandeur; YELLOW – a symbol of the sun and gold, but at the beginning of the XII century it acquires a negative meaning, and during the Gothic period it became a symbol of the lie and betrayal of Judas; BLUE – the sky is divine truth and justice, but there are exceptions – in Germany from 1557, by law, wearing blue was punishable by death, and after 200 years it became the royal color; GREEN – resurrection, spring renewal (close to the cult of Osiris); BLACK – darkness, hell, sin, but at the same time it is a symbol of monasticism and calm, renunciation of sins, a symbol of mourning (non-existent).

Colors as a means of expression in cinematography are very important. In front of a well-trained jury at film festivals, there is no way you can not get a question that starts with: “Why is this decided one way or another, in this color or in that …? “. And you have some of the answers above. This is not the end of the story.

In the next blog there will be a second part of this topic about colors. Goethe was one of the founders of color theory and, of course, to mention Newton’s color system.