I am certainly far from being an expert. But, with the wine tastings that my friend organized with different Macedonian wineries with incredibly good, delicious and award-winning wines … somehow it makes me (semi) qualified to offer a specialization in terms of connecting two arts – movie and wine.

Yes, wine is not just a science but an art of the oenologists – at least that was the experience I had during the visit to one of the tastings, where a lot of discussions took place while we were enjoying, and where the way of creating a wine is like creating a work of art!

The idea clicks on me and I start communication with my friend with unprecedented fervor! Phenomenal enjoyment in sight, I seek additional info on home varieties, the combination of foods that are suitable to make the holy trinity.

We end the cultural exchange and the research can officially starts. Cheers!

A characteristic variety for Macedonia (in our country it is considered the most important grape variety), Montenegro and even Serbia. It is considered a robust, aggressive wine, full of character. It has a characteristic dark red color, with the smell and aroma of red blueberries and fruit marmalade with strong tannins and a long aftertaste of dark chocolate and cocoa. If it ages, it gets even more luxurious! 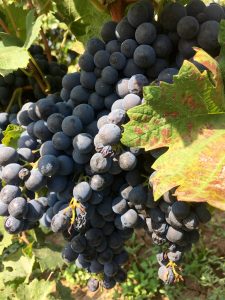 Since the name itself is associated with strength, power, black stallion, Vranec, would go well with an Action – “Seven samurai”, Akira Kurosawa, for a veteran samurai, who together with six samurai try to protect a village from cruel bandits. It is an epic film, given the story, and the fact that it is one of the most influential films of all time! Like the Vranec! Yes, the movie lasts a long time, just like the long aftertaste of the Vranec.

Considering that it is the most produced variety in our country, I will single out “Dust” by Milcho Manchevski, which is a drama / western, but I will connect it with Vranec anyways. A story of love and hate, with leaps from the past to modern life, tells two brothers – Elijah and Luke, in love with a woman – Lilith who chooses the younger, which leads them to fight for the opposing sides of the battle between Turks and Macedonians. And Kiril Dzajkovski is a genius – what a musical work!

The legend says that this variety has been grown on our territory since ancient times, when it was kept in amphorae for the nobles to drink! 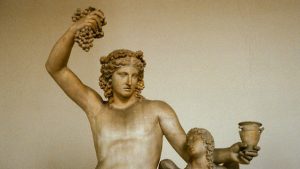 Ruby red color, with the scent of berry fruits, discreet tones of cloves, with an elegant, full taste, soft tannins and long lasting aftertaste. Like Vranec, Kratosija goes well with all types of meat and old cheese with strong flavors. Despite the fact that the variety was almost extinct until recently, Kratosija survived and the wine producers turned it into a top variety. It deserves full attention and I’m sensing dramaaa!

For the genre drama, I consumed Kratosija with the “First Man” bio-drama dedicated to Neil Armstrong, performed by Ryan Gosling. There is a reason why I choose the film – a seven-year struggle, a fight to reach the Moon, filled with sorrow, loss, sacrifice and failure – things that are not seen and thought except in the image of Armstrong as a hero! “First Man” nurtures the silence that happens when the dreams we dared to dream come true.

And if you have not seen or forgotten it, the cult Macedonian film “Tetoviranje – Tattoo” about Ilija, which shows the system of government through absurdities, also fits with the choice of wine.

An autochthonous type of grape that is grown only in Macedonia and is not found anywhere else in the world! Hot damn! 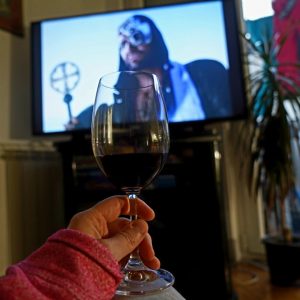 It usually has the color of berry fruits and the aroma of a dry leaf. It makes a great addition to white and yellow cheese, light and creamy desserts, a combination of nuts and sweets, and of course not to miss -the sarma and stuffed peppers. It has a rich extract and a high level of acidity which gives the wine extraordinary freshness.

We go with sci-fi. “Ex Mahcina” – for Caleb, the programmer who gets the chance to be part of a strange experiment, in order to evaluate artificial intelligence, through interaction with the female robot Ava. The modern Frankenstein battle of the sexes, played with the mind and basic instincts, is complex with a piece of tiramisu and I would say somewhere 2-3 glasses of Stanushina.

Now. Since it is an indigenous species, I recommend “Zbogum na 20-tiot vek! – Goodbye, 20th Century! “ because the directors Darko Mitrevski and Aleksandar Popovski created a new and specific genre, ethno-groovy where through the characters various biblical, mythological scenes are woven and a bunch of phrases from world cinema are used. And how can I forget the anthem from my childhood, Archangel “Uber Makedonische”, awesome soundtrack!

For the winter, red wines are more common, but in the name of the blog, whites must be respected!

My favorite white wine. It has a pronounced nutmeg and a rich scent that leaves no one indifferent. The name itself, incense, means strong. It is characterized by a light yellow color, with intense aromas of elderberry, honey and the taste is dominated by flavors of peach, apricot, prune, orange which are dominant at the beginning, while the taste of basil and incense follows later in the freshness and long aftertaste. Combines well with light foods, white meat, seafood and desserts.

I combined it with a documentary – “David Attenborough: Planet Earth II“, the taste and smells just complement the beautiful islands that offer sanctuary to some of the rarest creatures on the planet, the beauty of cities, where people live along the animals.

And, if you have not seen ours most awarded film, “Honeyland” is a must have !!!

Originally from Mostar, Bosnia and Herzegovina, to be planted everywhere in Yugoslavia, and here. It is known for its bright, green-yellow color, with elegant fruitiness. It has a thread with notes of quince, ripe peach and lemon that stay in the mouth. It combines with pasta, cheese, white meat and desserts, which makes it great for consumption with adventure or fantasy. “Jumanji: The Next Level” – if you are a fan of the version with Robin Williams (and I do not know how many times I have seen it), as an interesting and enchanting adventure that will make you laugh, you will easily relax with this adventure in the super performances of Dwayne Johnson, Kevin Hart, Jack Black and Karen Gillan and old school actors Danny DeVito and Danny Glover. It certainly does not prevent you from connecting with the predecessor “Jumanji: Welcome to the jungle”, just to be up to date, what happened before.

It is characterized by freshness, with aromas of citrus fruits and banana. The taste lasts a long time and is reminiscent of green apple and lime. Combines with vegetables and seafood. Exactly Mediterranean. With a touch of romance.

I combined it with “Carol”,  paying tribute to the phenomenal performance of Cate Blanchett and Rooney Mara, which tells the rare story from 1952, about the intense relationship between saleswoman Teresa and the confident Carol, who successfully captures intimacy and prejudice in living the authentic lives. Happy ending story!

“Skopje Remixed” and Zupjanka. A film omnibus of 9 small pieces, with love and crime stories, guided by music from the underground scene, giving the charm and soul of the city. It is a visual remix of the city – how it is experienced and what the directors, the artists want Skopje to be. Skopje is a beautiful city!

I know what you going to say – a cocktail drinks from Schpritzer to Bunar.

This is a tribute to Smederevka, which is much more than wine for making a cocktail. At first, when it was offered at one of the tastings, I was with comeeee ooon, but the fruity aroma, with its harmonious taste and delicate aromas, changed my mind. It is a table wine and can be combined with light appetizers, white meat, cheese, fish and seasonal salads. Comedy or dramedy (comedy and drama) was set.

“Iscelitel – The secret ingredient” by Gjorce Stavrevski, a wise film with satire, about Vele’s magic cake which is a cure for cancer. A phenomenal depiction of human destinies in our country, through humor and, humor is a cure. Say no more – you must see it !!!

“Julie & Julia” – my obsession with Meryl Streep, as well as the phenomenal Amy Adams is based on this film, driven by real events. I deliberately emphasize Smederevka for this film, because of emphasizing the importance and diversity of the variety just like the different and similar lives of Julie & Julia. And “Mastering the Art of French Cooking” will take you and brake you! On such cooking, breaks are blessed, to supplement the appetizer board and… diet starts from Monday!

And of course I have to share “Death becomes her”, the black comedy performed by Meryl Streep, Goldie Hawn and Bruce Willis, hoping that if I consume Smederevka, as well as they did consume the magic potion, I will be promised an eternal youth! 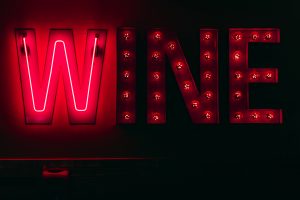 Whether producing a movie or a wine, you need a lot of creativity, vision, technical knowledge. The connection that is created between the two forms of art, from one sip to one scene, can move all our senses, giving us a new experience and emotion. And that is quite powerful!

So, the next time you want to watch a movie, indulge yourself with a glass of wine, with an appetizer, relax, and say “cheers”!